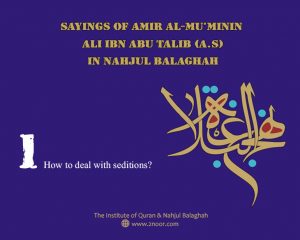 A Fluent Interpretation of the Wise Words Of Imam Ali (a.s) in Nahjul-Balaghah-Wise Word No. 1

How to deal with seditions?

In times of seditions and corruption, be like a two-year-old male camel that has neither the back to ride nor the breast to be milked.

We must be careful in special circumstances where the facts are vague and unclear so that we do not get caught in the vortex of sedition and do not act in favor of the seditionists and corrupted ones. Imam Ali (AS) says in such cases,” be like a two-year-old male camel that does not ride anyone, because he   has neither   the strength and ability to give a ride nor has a breast to use his milk and to be milked”.

Imam   Ali ( A.S)  in fact  calls and orders his followers  not to cooperate with the seditionists so that the sedition (which was committed by seditionist)can be neutralized , weakened and eliminated

“Sedition” in general term  means infidelity, misguidance, turmoil, testing and being tested  and other meanings. But in its special term, it means the difference of opinion and views of the people so that it leads to unrest and anxiety among them. Nowadays   sedition means , complex events, the nature of which is not clear, have a deceptive and esoteric appearance full of corruption and lead human societies to disorder, destruction, corruption, enmity,  war and bloodshed.

The purpose of committing   sedition is often to achieve political goals and gain social positions, but sometimes sedition is also associated with cultural and religious motives, such as promoting materialism and worldliness, spreading moral corruption, denying God or other religious realities…

According to the Qur’an, the sin of sedition is greater than murder (holy Quran, chapter 1, verse 191). Because in murder, human  lives are taken, but in sedition the  people’s faith is destroyed or the security of  a society, which is necessary for a peaceful life, is destroyed; and these two are more important than human life.

Messages of the Wise Word No. 1:

Since the causes of sedition are often material, then there is sedition at any time. Hence, one must be careful in all moments and circumstances not to fall into the trap of seditionists.

Imam Ali, by likening a believer to a male camel [during seditions], seeks to state that although the believer is also among the people during sedition and leads a normal life; But he should not use himself as a tool of seditionists and take steps in their interests

Based on the conditions and the type of sedition, it should be faced with it  and  we should  pass over it  safely, and this does not mean silence and being silent and withdrawal during seditions, because sometimes silence opens the way for some seditionists to ride and benefit from the sedition.

In sedition, be such that they do not bar on   you and do not use your hands and tongue

Now you can answer the following questions:

2. For what reason is a believer likened to a Two-year-old male camel baby in this wisdom?