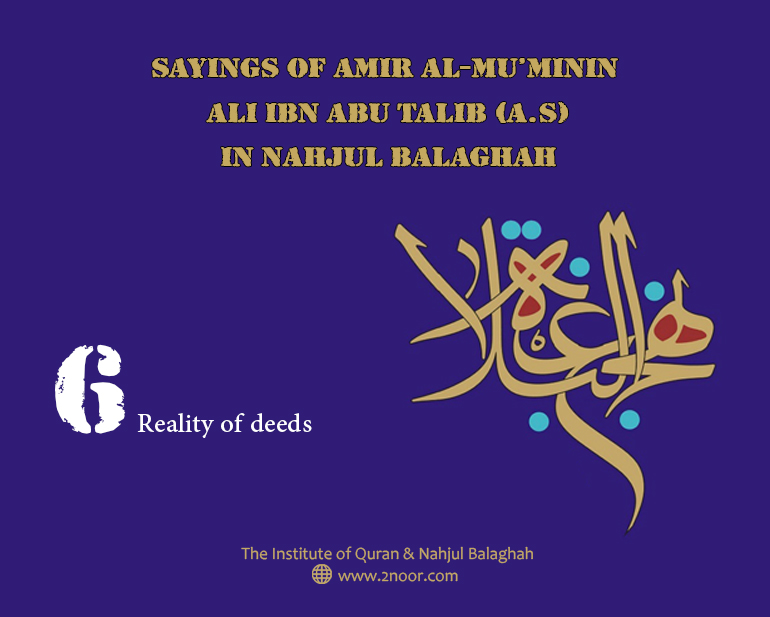 A Fluent Interpretation of the Wise Words Of Imam Ali (a.s) in Nahjul-Balaghah

A conceited and self-admiring person is disliked by others;

charity and alms are the best remedy for ailments and calamities;

one has to account in the next world for the deeds that he has done in this world.

Imam(AS), In this statement, he considers the result of the ugly attribute of selfishness to be the increase of opponents and enemies,

and introduces charity as a healing and saving medicine, and in the final part,

he clearly points to the embodiment of deeds in the Resurrection and says: “The actions and behaviors of the people in this world are in front of their eyes in that world,

and none of their behaviors will be destroyed.”

1- One of the types of selfishness is to be smug, which according to the narrations is considered as a fatal damages.

The self-satisfied person is not popular with the people; Because:
* Looks at others with contempt;
* He considers his dignity higher than his real dignity and does not see his flaws and instead of admitting his mistakes, he justifies himself and thus provokes the anger of the people;
* Because he sees himself as better and more complete, he does not see the people as entitled or dignified and is not willing to fulfill the rights of the people.

2- Prophet of Islam(PBUH)said: “Treat your patients with charity.”

The point is that since the almsgiver removes someone’s troubles, God Almighty also removes his calamity in the world.

Almsgiving in the Hereafter also reduces or eliminates divine punishment.

Almsgiving is a medicine that is not only a cure for diseases, but also a cure for many calamities and afflictions;

That is why Imam(AS) says: “Almsgiving is a useful and saving medicine,”.

3- According to the verses and narrations, the moribund sees all the things he has done during his life at the moment of death [before he dies].

It seems that in a moment, the curtains will be lifted and, like the one who dominates the surrounding area from the mountain, his horizon will increase when he dies.

On the Day of Judgment, it will be the same: [he will be told] ‘You were certainly oblivious of this. We have removed your veil from you, and so today your eyesight is acute”.

The last point of this enlightened wisdom indicates that human deeds are embodied and every action,

whether good or evil, is formed in proportion to itself and will be placed in front of human eyes:

“The day when every soul will find present whatever good it has done; and as for the evil, it has done, it will wish there were a far distance between it and itself.”

For example, the form of backbiting, will be like eating the flesh of his dead brother, or eating usury and orphan property, is embodied like eating fire.

1. let’s count Almsgiving in the way of Allah as an effective factor in curing diseases and afflictions, financial development,

longevity and good death, easy reckoning and the pleasure of God.

Every constructive action, every positive action is a charity for others.

Also, the dissemination of knowledge and the development of human wisdom and the promotion of religious knowledge is a clear example of the generalization and expansion of charity in the logic of Islam.

2. If we know that we are in front of the camera and we will see our own behavior again,

we will behave very carefully and thoughtfully,

so if all our behavior in the hereafter is in front of our eyes, we must be careful on each action and behavior and avoid any wrongdoing and misbehavior.

3. A true Muslim should always trust Allah and mistrust himself . (Not that he trust himself and is satisfied with his deeds and has suspicion of God Almighty in return)

1. Why is a complacent and smug person unpopular among people?
2. Why does giving alms cure diseases?