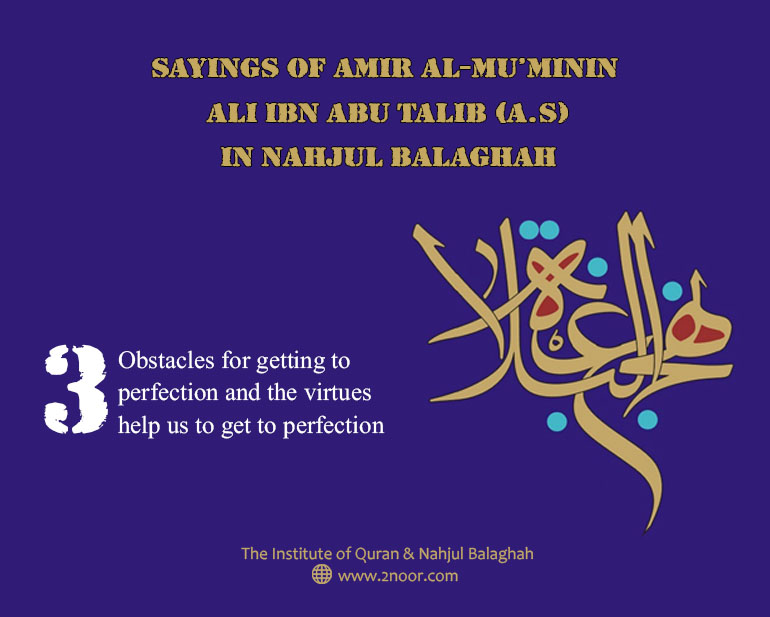 Translation of the wise word No. 3 (Hikmah No. 3):
Imam Ali (a.s) said, “Stinginess and Miserliness are disgrace. Cowardice is a defect. Poverty makes a smart person unable to express his reasons and what is in his mind in other words the poverty makes him dumb. He who is poor is a stranger even in his own city .Disability and distress are desperation and are like a blight or pest. Patience is heroism. Piety is wealth, and self-control and avoidance of sins are like a shield”.

Abstract of the wise word No. 3

In this wise word, Imam Ali (a.s) point out to three ways and traits of spiritual growth and perfection and also mentions four obstacles for the man’s perfection. Obstacles are including:
1. Stinginess which is a disgrace;
2. Fear, which is the cause of human shortcomings and deficiency;
3. Poverty as a social problem causes the poor person to suffer from disability or slowness in expressing what he has in his mind even with his relatives who may treat him as a stranger when the poor person can’t express what he has in his mind or say his demand freely ;
4. Physical and mental disability, which is a great calamity for human being. In the last part, Imam Ali (as) has described three desirable attributes, namely patience, piety and self-control, which are in fact considered as the tools to get to spiritual and psychological empowerment and somehow remove the previous obstacles.
Patience is courage and against fear. The real wealth is piety and contentment, with which one can avoid the ill effects of poverty.
Although disability and distress are desperation and are like a blight or pest, but the real disability and harm is the one who has no shield like piety.

1- Stinginess and Miserliness are refusal to donate and helping others and in return, excessive donation; that is, there is too much generosity, which is also reprehensible. The best way is to be moderate; As God Almighty said in holy Qu’ran in chapter Isra (Chapter14, V.29) :
“وَلا تجعَل یَدَکَ مَغلولة ً الی عُنقِکَ وَلا تبسُطها کُلّ البَسط ِ فتقعُدَ مَلوماً مَحسُوراً
”Never chain your hand around your neck [ironically means you do not leave charity and donation] and do not open your hand too much (do not donate too much) that you will be blamable and your usual work and life to be faced with and surrounded by problems “(chapter 14, Verse29). Of course stinginess and miserliness, is an internal condition, and not donating the wealth that appears in outside world is the fruit and result of the attribute of miserliness, and it is not miserliness itself.

2-Fear is the opposite of courage and courage is one of the pillars of faith and of human perfection. Coward person does not defend his honor, dignity, and reputation and can never use God-given abilities and talents; Hence, fear is a great defect.
3-The poor person reveals his need to the people and express his poverty; but there exists persons who have little money and in spite of the intensity of their need, they express wealth and claim that they are rich these type of people in Arabic language are call Muqell (مقّل),

4-When a poor person is not the able to donate and help others financially
So other people turn away from him due to his poverty, he feels homesick and lonely, even though he is in his hometown and among his family and relatives.

5- Poverty is not acceptable; Hence, if in some narrations and hadiths poverty is praised, it refers to our understanding of poverty and our need in front of God, As Allah says in holy Qur’an in Chapter Fatir(Chapter 35, Verse 15)
يَا أَيُّهَا النَّاسُ أَنْتُمُ الْفُقَرَاءُ إِلَى اللَّهِ ۖ وَاللَّهُ هُوَ الْغَنِيُّ الْحَمِيدُ(فاطر،آیة 15)
or sometimes it refers to the simplicity of life and contentment, which is apparently may be similar to poverty but it is not poverty.

6- Disability has a wide meaning that includes any physical, economic and intellectual disability. So any kind of disability is a kind of plague and damage
7-Patience means standing up against hardships, calamities and accidents and carnal desires, so that, these things do not affect him and at the same time he has peace, tranquility and mental stability as he (the patient one) was before facing those problems and hardships. Patience in giving up the pleasures of committing sins, patience in the hardships of fasting in Ramadan in the hot weather of summer, patience in losing property and children etc…are some good examples of patience.
8-Courage causes resistance and endurance against the enemy, and patience is nothing but resistance and endurance, so patience requires courage and the patient one must be brave and courageous

9- Imam Ali (AS) considers piety as to lower our desires and ambitions, and to be thankful for the blessings of God and avoidance of prohibitions, and in another place he says that piety is between two words of the Qur’an,” not to be sad about what is lost, and not to be happy with what is gained “(Chapter 57 Al-Hadid , Verse23 ). so we can say that piety does not mean not having but It means not wanting and not desiring , and not feeling dependent on this world and it’s belongings.

10- Just as the shield protects man from the damage of arrows and swords, so does the constant piety and watching our words and deeds protect man from all kinds of harm, sins, damages and divine punishments.

1-We do not consider wealth, money and possessions the only material possessions; Spiritual things like piety are also wealth. “piety is wealth” and the wealth of the pious person is more than the rich person and his wealth is a real wealth ; Because the rich person need wealth to meet his needs, but the pious one does not need others or even the material wealth of the world; Therefore, Imam Ali (a.s )invites us not seek only material wealth.

2-If the people of a society want to be safe from damages they not only should seek as much as possible from the findings and progresses of other societies but also they should strive to overcome disabilities, flourish capacities and grow self-confidence and self-sufficiency.

3- Reacting and violent confrontations are not always a sign of courage; Sometimes being brave and courageous means to be patient!
4-One of the most important ways to leave moral vices and also to acquire moral virtues is to pay attention to the effects and results of each of them.

Poem(English Translation)
The contented person is not a stranger to mountains, plains and deserts.
Because wherever he goes, he pitched the tent which is like a palace for him
(Poem in Persian):
آن را که بر مراد جهان نیست دسترس در زاد و بوم خویشتن غریب است و ناشناس

Now you can answer the following questions:
1. Is excessive charity and generosity for helping others, the right way to fight stinginess?
2. Why does the poor man feel homeless and lonely in his city?
3. Explain the phrase “piety is wealth”?
4. What should the people of a society do if they want to be safe from harms and damages?